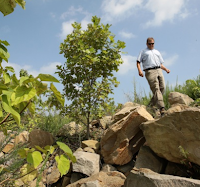 "A group promoting reforestation in Appalachia is seeking more than $422 million to plant trees on mountains that were cleared or leveled for surface mining, a program that could have far-reaching impact on the economy and environment of the region," Bill Estep reports for the Lexington Herald-Leader, in the first of a series on mine reclamation in Appalachian Kentucky. (Photo by Charles Bertram)

Building on research at the University of Kentucky, "Leaders of the Appalachian Regional Reforestation Initiative are seeking federal stimulus money to plant 125 million trees in Central Appalachia, including Eastern Kentucky," Estep writes. "The goal is to put back trees on hundreds of thousands of acres where they once stood, but which coal companies reclaimed as grassland after surface mining over the last three decades." (Estep has a sidebar on mining practices.)

In addition to creating "an estimated 2,000 jobs for forestry technicians, tree-planters, bulldozer operators and others," Estep reports, reforestation would restore at least a facsimilie of the previous habitat for wildlife and "improve water quality in streams, reduce the potential for flooding, soak up carbon dioxide out of the atmosphere and lay the foundation for an expanded wood-products economy." (Read more)
Written by Al Cross Posted at 8/17/2009 11:39:00 PM