Writer knows where to find facts and do a sidebar; photographer knows how to capture the scene 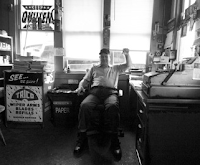 When Ronnie Ellis of Community Newspaper Holdings Inc. went to northeastern Kentucky to cover a big special election for a seat in the state Senate, he didn't just do the basic situation piece about the race, visiting local hangouts and interviewing voters. He produced a nice feature story on one hangout, operated by Joe Quillen, 82, above. (Photo by John Flavell, The Independent, Ashland)

"If you want to know what’s really going on, go to Quillen’s Service Station," writes Ellis, who is based in Frankfort and writes for CNHI's five daily papers and six weeklies in Kentucky. But don't expect to top off your tank. "The gas company took out the pumps years ago. ... It’s more social club than commercial enterprise. And civic club."

“They know everything – EVERYTHING,” state Rep. Tanya Pullin, D-South Shore, told Ellis. “And what they don’t know, they’ll figure out for you. And they’ll tell you when they do.” Ellis concludes, "Pullin said the group not only knows what’s going on in their community today – they know every bit of history for the past 40 years so they understand what led to today’s news." (Read more)

Every town has one or more places like Quillen's. Rural journalists, avoid them at your peril. Here's a slide show from Flavell: