Obama health plan in the ditch because he didn't hitch his wagon to rural senators, expert writes

"What promised to be a consensus-building search for solutions for American’s unsustainable fragment health problems has turned into a debacle," and the blame lies squarely with the president, Obama supporter and former Kentucky health commissioner Robert Slaton opines for the Daily Yonder. 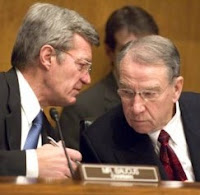 "His first mistake was to discount the good advice he was getting from rural senators on both sides of the aisle," Slaton writes. "Obama is an urban president and he’s been looking to the coasts for direction. He should be looking more to the Plains," to senators like Democrat Max Baucus of Montana, left, and Republican Charles Grassley of Iowa, right, who have been the key players in trying to salvage a bipartisan compromise in the Senate.

Last November, Baucus offered a plan that built on a growing consensus for action on health care, and even included a public option for coverage. Slaton suspects Obama ignored it because he and Grassley "were from rural states and didn’t have the clout with the President and his team that the elite East and West coast urban liberal Democrats held. This is symptomatic of the President’s first crucial mistake — assuming that his election was a mandate for a major shift to the left."

Slaton, right, says other mistakes were letting congressional committees write various plans, forcing Obama "to explain and sell a plan that does not yet exist;" and making a villain of the insurance industry. With that last move, "He abandoned all hope of equally offending everyone while getting them all to give up something in return for the greater good." (Read more) Slaton is a member of the executive committee of the national advisory board of the Institute for Rural Journalism and Community Issues.
Written by Al Cross Posted at 8/20/2009 10:58:00 AM

If anything, Obama has deferred to Baucus and other rural Senators too much, not too little. If they had their act together, a bill would have passed by now. My (truncated) Daily Yonder comment:

What has really happened is that Republicans have decided on a
strategy of opposition. They offer no plan of their own to reform
health insurance because they don't want any reform. Just two days
ago Obama said he was willing to drop the "public option" so
vehemently opposed by Republicans. Immediately Senator Cornyn said
they would oppose the co-op plans offered by Senator Conrad as a
compromise. Chuck Grassley (who is an absolutely fantastic Senator on
farm issues, by the way) said he wouldn't vote for a bill unless it
had broad Republican support, no matter what he personally thought of
it- essentially guaranteeing a no vote from him, given that no matter
what only a few Republicans would ever be willing to vote for it.

The White House has not ignored the Baucus plan, and they haven't
ignored Max Baucus or Chuck Grassley. Several former Baucus staffers,
including his former chief of staff Jim Messina, hold important
positions in the White House. The same is true of former Daschle
staffers. Grassley has been repeatedly courted by Obama and his
allies. As for Obama alienating the insurance industry, well, as I
said earlier, he's already taken single payer off the table. And he's
clearly willing to drop the public option.

The simple fact is that with 60 Democrats in the Senate there are
fewer moderates Republicans left to work with, even though moderate
Republicans still exist outside of Washington DC. The vast majority
of Congressional Republicans remaining have decided their path to back
to political glory is paved with fiery opposition to Obama, no matter
what he is proposing. And the ultra-conservative Congressional
Republican viewpoint dominates TV and radio. In this environment,
Obama has been remarkably patient with Max Baucus and all of the rural
Democratic Senators, giving them far more influence than the numbers
of people they actually represent would indicate they should have.
Every time they- or the so-called moderate Republicans- throw up an
objection, the White House and Congressional leadership have agreed.
Single payer- gone. Public option- damn near gone. Tying any new
plan's rates to Medicare rates- gone, because rural lawmakers think it
is unfair (which, in many cases, it is). Giving Medicare the ability
to negotiate drug prices- gone. Limiting the tax deductions for very
wealth individuals to pay for health care reform- gone. Voluntary end
of life issues counseling sessions paid for by Medicare- gone. It is
no wonder some of the more liberal members of Congress are starting to
get a little upset. All of these concessions being made, yet Max
Baucus still can't get a bill out of committee.

I think it is time for the Democrats- Pelosi, Reid, and Obama- to tell
Baucus and his cozy little group to put up or shut up. Every other
committee has their bill ready for action. Concessions are being made
continuously, but not by the Republicans who constitute a shrinking
legislative minority. The Baucus plan was a compromise from the start.
It has been compromised further. If there is anyone to blame for the
mess health insurance reform has become, it isn't Pelosi or Reid or
Obama or even really Baucus. It is Congressional Republicans who
refuse to compromise, refuse to offer their own ideas beyond HSAs, and
embrace irrational anger and hatred as their defining ideology.