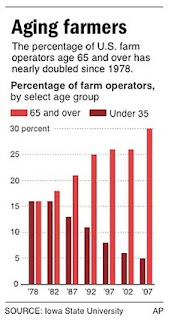 As the average age of farmers increases and so does the cost of getting into the business, several states have started programs to pair up seasoned farmers with would-be farmers, reports Sharon Cohen of The Associated Press:

"Aspiring farmers then don't have to dig themselves into a half-million dollar hole to launch their careers and can hook up with a farmer in his 50s, 60s, or 70s who can plan ahead. Ideally, the older ones won't have heirs who want to follow in their footsteps. If their personalities mesh, the two can become partners. Later, the hope is the established farmer will sell, rent or make some other arrangement that keeps the younger one on the land.There's a broader goal, too: Save the family farm. And a bonus: Put more kids in rural schools, pour more money into Main Street, preserve small towns."

Cohen went to Iowa to report the story, and noted similar programs in other states: "In Oregon, a program started this spring that reaches out to aspiring farmers and those leaving agriculture, looking for possible partners. In Virginia, an online database tries to hook up the two generations. In Nebraska, there's a match program and tax breaks for farmers who rent to beginners. And in Washington state, a nonprofit group has 300 people eager to start (mostly organic) farming, and 65 landowners looking to give someone a try." (Read more)
Written by Al Cross Posted at 8/16/2009 05:50:00 PM