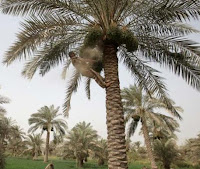 "In Iraq, one of the places where agriculture was developed more than 7,000 years ago, there are increasing doubts about whether it makes much sense to grow ... much of anything," Timothy Williams reports for The New York Times. "Wars, sanctions, poor management, international competition and disinvestment" have left the country's agriculture "a shadow of its former self," and the same is true for manufacturing. (Times photo by Joseph Sywenkyj: A worker shakes sand from green dates near Baghdad)

"The agricultural industry has been particularly damaged during the past few years, a situation perhaps nowhere more apparent than in the country’s once bountiful date orchards," Williams writes. "Date palms have been left to die for lack of water, and fungi and pests have ruined thousands of tons of fruit because the country has only three crop-dusting airplanes and three qualified pilots. American military approval is still needed to fly."

The decline of dates has had big ramifications. The lack of work for young men fed insurgencies, and "As growers have abandoned farms, the orchards that had once formed a lush green ring around Baghdad have shrunk, causing more frequent sandstorms in the capital this summer and higher rates of asthma and other respiratory illnesses," Williams reports. It's a sad tale that reminds us of the fundamental nature of farming in civilization, proven in the same valley of the Tigris and Euphrates so long ago. And the story also has some data on dates that we bet you didn't know.
Written by Al Cross Posted at 8/15/2009 03:07:00 PM