As old dams get removed, more 'fish-friendly' ones are proposed to generate hydroelectric power

"In the 1950s and ’60s, a dam went up in the United States every six minutes to generate electricity, provide irrigation water and protect against floods, according to the United States Forest Service," Matthew Preusch writes for The New York Times. "If that was the great dam-building era, we are now in the age of dam removal." 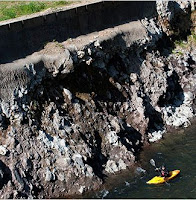 Maybe, but perhaps not for long, at least in parts of the country where there is a growing demand for hydroelectric power. Joshua Zaffos reports for High Country News that utilities in the Pacific Northwest are considering dams for hydropower that would be "more fish-friendly" than those that disrupted salmon runs. Most would be "run-of-the-river," less than 15 feet high with little or no impoundment. Still, "These small projects in many cases have the biggest impacts relative to their size," Thomas O'Keefe of American Whitewater told Zaffos. (Read more)

Preusch also reports from the Northwest. He cites an Oregon dam (Times photo by Stuart Isett) that a utility tore down and replaced with "cheaper power sources rather than pay for repairs and upgrades. Others are known as L.D.D.’s ... 'little dinky dams' that few would miss. There is also a growing consensus that dams are destructive to fish habitats and wildlife, and environmental groups have been lobbying aggressively for their removal." American Rivers says about 40 are removed each year.
Written by Al Cross Posted at 8/10/2009 08:20:00 PM