The word "unique" is not supposed to take modifiers of degree, but every stop on the Obama administration's Rural Tour is arguably unique, and the latest one was probably the most unique -- or, to be grammatically correct, the one that was most undoubtedly unique. It was in rural Alaska, off the road system: at Bethel, in the Kuskokwim River Delta, and Hooper Bay, on the Bering Sea south of Nome.

The secretaries of energy, education, housing and agriculture came, marking the first time that four Cabinet members had ever been in Alaska at the same time, Democratic U.S. Sen. Mark Begich told Rhonda McBride of Anchorage's KTUU-TV. Agriculture Secretary Tom Vilsack, who is making all the tour stops, said Alaska hasn't taken enough advantage of his department's Rural Development programs. 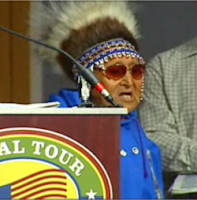 The visitors were welcomed by Yup'ik Elder Peter Jacob, left, and educated by Nick Tucker of Emmonak, who told them, "Our subsistence way of life and culture is unique to our country. It's precious, and once they become extinct you will have lost a sacred set of values and teachings."

Energy is a major challenge in rural Alaska. Energy Secretary Steven Chu told the locals, "If there's any place in the United States where renewable energy has a cost advantage, it's Alaska." But McBride noted in her report, "High cost makes wind generation three to four times more expensive to install." Chu, who seems to be the most uninhibited Cabinet member on the tour, expressed dismay that houses were being built so close to sea level, presumably given the prospect that the level will rise with climate change. (Read more)
Written by Al Cross Posted at 8/14/2009 05:22:00 PM