His metropolitan paper closed, political writer found a new calling as owner of a rural newspaper 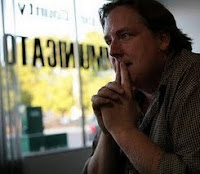 As metropolitan newspapers cut staff to survive, some of those journalists are migrating to the bright spot in traditional journalism: community newspapers. One whose story has received the most notice lately is ME Sprengelmeyer (no punctuation), late of the late Rocky Mountain News and now owner, publisher and editor of The Guadalupe County Communicator in his native New Mexico.

The career change began when Sprengelmeyer got Scripps Howard News Service to let him follow the presidential candidates around Iowa for the better part of a year, with a secondary motive. "I had the fantasy -- and a whole lot of reporters I know have had the fantasy -- of one day being a one-man newsroom at a tiny little paper like the one in The Milagro Beanfield War and so much great literature," he writes on Temple Talk, the blog of the Rocky's former editor, John Temple. (Photo from Temple Talk)

So, as he tracked the candidates around Iowa, Sprengelmeyer asked local journalists about their trade: "Are the ads still flowing? What about the Internet? Is it much of a threat out in the sticks? How many people does it take to put out a quality product? What if you made some strategic investments in quality content here and there? Would your franchise do any better, or had it already maximized the local potential? I didn’t always find healthy newspapers. But invariably, I saw potential . . . Because they have a physical presence, provide intense local coverage, stay within their financial means and tailor their content quite intensely to match the needs of the people who wander into the front door to complain every day, they provide a service that has lost little value over the past two decades of stunning technological changes." 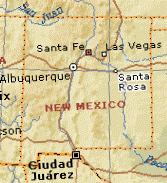 After he bought the Communicator, a small weekly In Santa Rosa (Encarta map), Sprengelmeyer got help from a "surge staff" of former Rocky colleagues. Now he's on his own. I wish him well, and as a former weekly editor who worked for a metro paper for 26 years and now tries to help rural journalists, I invite other metro refugees to follow his lead. (Here is the Communicator's Web site; it also has a Facebook fan page.)