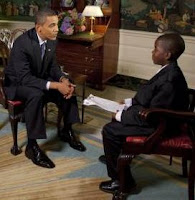 This is the best story of the day, so you've probably seen or read it already, but we can't ignore it, because it has a rural angle. Damon Weaver, the 11-year-old who landed an interview with President Obama and discussed it on several networks today, is from Pahokee, Fla., a rural town of 6,000 on Lake Okechobee.

"The 12 questions he asked the president focused primarily on education and were filmed as part of an educational program that will be broadcast to schools around the nation next month," report Dianna Smith and Jason Schultz of the Palm Beach Post. Weaver said on The Early Show' on CBS, "President Obama is so nice ... The president is a normal person."

"Damon's broadcasting teacher, Brian Zimmerman, said reporters in the White House press corps kept coming up to Damon before the interview with Obama and asking him about it, but he couldn't answer because it was supposed to be a secret. He said Damon has managed to keep the fame and media frenzy from going to his head," the Post reports.
Written by Al Cross Posted at 8/14/2009 08:08:00 PM