The sports editor for the Covington News, in Newton County, Ga., (pop. 94,947), not far from Atlanta, created quite a reaction with his column, "What if the hunter was the hunted?" Josh Briggs had received a photo of a deer hunter and the dead deer and felt moved to comment. Briggs started this way: "If I'm going to run deer hunting pictures in my section, I can at least give my take on it, right?" He goes on to explain, "When you are at war, it's you or your enemy. You look for the upper hand. You find an elevated position, sit for hours or even days on end and wait. That's fine. At least your enemy knows you're out there. ... But a deer has no clue. When you sit in a tree stand and wait for a deer to come through your baited area, it's just a matter of time. ... Where's the sport in sitting your lazy butt in a tree stand and waiting for a deer to pass by?" (For larger view of map) 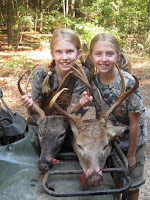 The reaction was swift and vocal, with 750 letters from around the world and network news coverage. One wildlife biologist explained deer hunting as "the scientifically proven BEST method of controlling these populations without letting starvation and disease do it for us." He added, "I will be boycotting the entire newspaper because of this article and will be persuading my friends and family to do so as well." Nearby Augusta Chronicle writer Ron Pavey also felt the need to comment: "Being from California, where they do things differently, [Briggs] proceeded to attack deer hunters as lazy, insinuated that wildlife management through controlled hunting was a myth and made the erroneous assumption that people who hunt from a treestand are doing so over bait." He then invited readers to submit their deer hunting photos to the Augusta Chronicle (see photo).
Pat Cavanaugh, the general manager of The Covington News, responded in a column published three days later. "It still catches me off guard and amazes me what type of story will really get readers’ attention. ... the shock of what [Briggs] wrote caused me to spill my coffee on myself and almost choke on my muffin. I knew our publisher, Charles Hill Morris, himself part of a family that has a hunting tradition that goes way back, would be shocked and mortified." Ultimately, the general manager supported his editor. "For those of you who have told us that you and your friends are taking up a collection to send our sports editor packing, that is not going to happen. We encourage the people who work at our paper to have and express their own opinions, as we encourage you. ... As for the many calls we have received, we appreciate them ... not only on this issue but any issue that appears in The Covington News. We look at your thoughts, either ones we like or we don’t like, as proof that the First Amendment ... is still alive and well and protecting all of us from tyranny."

Briggs responded in his column on Tuesday by apologizing. "I apologize to you for being so extreme with such a sensitive issue. I apologize to our advertisers for the negative attention and to the hunters in the community who go about the sport the right way."
Written by Lu-Ann Farrar Posted at 10/27/2010 03:33:00 PM