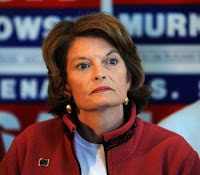 Alaska Republican Sen. Lisa Murkowski's write-in candidacy for re-election hasn't stopped newspapers around the state from endorsing her in the upcoming election. "The Anchorage Daily News, the Juneau Empire and Alaska Newspapers Inc., which publishes six weeklies, tout Murkowski's seniority in their endorsements," of the incumbent senator, who holds a leadership position on the Energy and Natural Resources Committee, Katie Howell of Environment & Energy Daily reports. Murkowski lost the Republican primary in August to tea party favorite Joe Miller, but following the loss she announced a write-in bid to retain her seat, drawing criticism from Republican leadership. (Lisa Murkowski, Photo by Erik Hill/Anchorage Daily News)

"Alaskans need someone who has a grasp of the large issues that will allow the state to advance without missing the fact that we need to move forward together -- tiny villages and all," the Alaska Newspapers Inc. editorial board writes. "Murkowski's experience -- and Alaskans' experience with her leadership -- shows she's the right candidate for the job." Alaska Newspapers owns The Arctic Sounder, The Bristol Bay Times, The Cordova Times, The Dutch Harbor Fisherman, The Seward Phoenix LOG and The Tundra Drums. The Anchorage Daily News touts Murkowski's ability to work across political aisles in its endorsement, writing, "The last thing we need, as Alaskans or Americans, is more extreme partisanship in Washington, D.C."

"Current polls show her running neck and neck with Miller, while Democrat Scott McAdams trails," Howell writes. "Still, because of the complicated nature of write-in campaigns, it is difficult to know whether that support in the polls will translate into real votes on Election Day." The Daily News notes the decision to run as a write-in candidate "was not the easy choice for her," adding, "she is running where she truly lives -- near the political center -- and where she has rediscovered that most Alaskans and Americans live." (Read more, subscription required)

Murkowski's chances may hinge in part on a superior court judge's ruling, expected Wednesday, as to whether the state Division of Election can provide a list of write-in candidates to voters who request it. "The Democratic and Republican state parties argued Monday afternoon for a temporary restraining order to stop" the division of election from providing the information, Joshua Saul of the Alaska Dispatch reports. "The crux of the argument between the two sides hinges on the definition of  'information,'" Saul writes. "A Division of Election regulation states that 'Information regarding a write-in candidate may not be discussed, exhibited, or provided at the polling place.'" Margaret Paton-Walsh, the assistant attorney general representing the Division of Election said, "Alaskans who want to vote for a write-in candidate should be given all the assistance they require. The list is the most neutral way we can provide that information." (Read more)
Written by Jon Hale Posted at 10/26/2010 04:08:00 PM