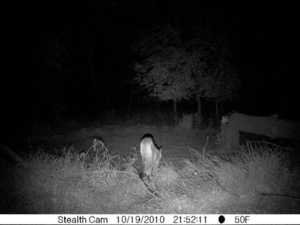 Mountain lions have returned to Kansas and a local hunter captured proof on a motion-activated video camera. Michael Pearce, of The Wichita Eagle, reports that Caleb Mahin, of rural Courtland, found several images of what appears to be a mountain lion on a remote-controlled camera he had placed near the Republican River in Republic County. A local biologist confirmed from the pictures that the animal is the fourth mountain lion spotted in Kansas in the past three years. (Photo by Caleb Mahin)
The presence of mountain lions has been one of the most hotly debated wildlife topics in Kansas and other prairie and eastern states for decades, Pearce reports. For many years, some accused Kansas Wildlife and Parks of stocking the animals to control deer numbers and then denying they were in Kansas. Parks department officials denied doing that.
Mountain lions can travel long distances and have been showing up across the U.S. Cats seen in Nebraska are believed to be males looking for new territory, coming from an expanding population in the Black Hills of South Dakota. A mountain lion spotted earlier in Kansas had a radio collar that indicated he had been caught in Colorado and had traveled 200 miles to Kansas. After he was seen in Kansas, he was re-captured in New Mexico, traveling over 1,000 miles.  (Read more)

In some parts of the west, though, mountain lions are seen often enough to be considered a nuisance. In Sunny Brae, Calif., a mountain lion was sighted in town on Wednesday, reports Matt Drange, of the Eureka Times-Standard. "It happens fairly frequently," Arcata Police Department officer Sgt. Ron Sligh told Drange, adding that, "It's not uncommon to have a sighting and then have another a few days later." On Tuesday, a mountain lion with a dead deer was photographed near the Sacramento River, near Hamilton City., Calf., reports the Chico Enterprise-Record.
Written by Lu-Ann Farrar Posted at 10/28/2010 04:38:00 PM

My family and I live in California. I have been studying the mountain lion population where we live and there are about 6 in a 40 mile radius. So far I am waiting to see if the two young lions that will be looking for a new home soon, retrace their mother’s steps. The mother was born on Campbell Mountain with her male sibling. She came down here to have her two cubs and stayed for about 4 months. Then she took them back to where she was born to finish raising them. I am waiting to see what the young female will do. Hopefully they just stay away from the cattle and stay out of trouble. I was reading an article in the La Grande Observer, out of Oregon. With the new radio collars you don't have to track them with an antenna anymore. The collar sends a message through satellite and the biologist gets an email to the cat’s location. This helps establish a migration pattern. I have put cameras up on the mountain and gotten a couple of pictures. However the cat was too close and I need better pictures. It isn't enough that I saw the lion jump from one rock to another, watching my husband and I ride down the mountain (big healthy cat), I need better pictures. This is an interesting topic.