As it considers closing and downgrading many rural post offices, the U.S. Postal Service is being selective and inconsistent with the information it reveals about the business activity at individual offices. We'd be interested in hearing from our readers, especially journalists, about their own experiences on this front. 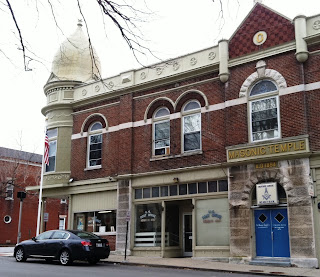 We've read stories, such as this one in the Rapid City Journal and this one in The Washington Post, that gave annual revenues and expenses of post offices that were the foci of those stories. Those reporters tell us they got their information from Postal Service officials. But when the Midway Messenger asked the manager of post office operations in the Lexington, Ky., sectional center for such data on the post office in Midway, Ky., above, he denied the request.

"The Postal Service does not disclose specific financial data, not even in response to a Freedom of Information Act request," Thomas J. Adkins wrote. "The revenues and expenses of our offices are considered proprietary business information." Midway Mayor Tom Bozarth had also asked for the information, to help him evaluate Adkins' claim at a town meeting on the issue that cuts at the office would save almost $100,000 a year.

But the USPS does release certain information, as it did to residents of Slayden, Tenn., population 300, who may lose their post office. At a meeting there this week, a USPS official "said low business activity at the post office warranted an investigation into the closure. She said the Slayden post office processes 15.1 daily retail transactions, 84.4 pieces of mail, rents about 68 boxes, and dispatches about 51 letters/flats," reports Josh Arntz of the Dickson Herald. The number of retail transactions was mentioned in a letter the USPS sent residents, Arntz told us.

Another postal manager "said a post office’s closure or consolidation is regulated by federal law," Arntz wrote. "Congress requires that the decision be based on the effect the closure will have on the community served and the effect on post office employees. She added that government policy dictates that the Postal Service must provide effective and regular service to rural areas, communities and small towns." (Read more)
Written by Al Cross Posted at 3/18/2011 05:06:00 PM