Derry Brownfield, who founded and sold an agricultural radio network that later fired him because he was too hard on Monsanto Co., died Saturday of an apparent heart attack at the age of 79. 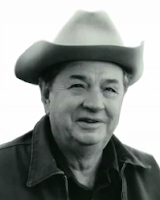 Brownfield, left, was a cattle farmer and University of Missouri graduate. He and friend Clyde Lear established Brownfield Network in 1972, and he called himself "America's most listened-to farm broadcaster." He sold the network to Lear in 1997 but kept the talk show he had started three years earlier. He called it "Common Sense Coalition" and used it to attack Monsanto for its business practices. In 2008, after complaints from the Learfield Communications sales staff, which feared loss of advertising from the chemical-and-seed giant, Lear asked his old friend to "lay off" the company or have a Monsanto representative on the show. Brownfield refused, and Lear canned him. For our story on that, go here.

"Never one to give up, Derry continued broadcasting his show via webcast," the Daily Yonder reports. "Long an advocate for family based agriculture and a harsh critic of its enemies, Derry Brownfield will be missed across Missouri and the entire nation." His old network has a Soundslides tribute to him on its home page, with Roy Rogers and Dale Evans singing Dale's "Happy Trails to You," which he used to end his show. It also has a video of Brownfield at work and a tribute from his friend Bob Priddy, which begins "He used to joke about things that would have to wait for 'Bury Derry Day'."
Written by Al Cross Posted at 3/14/2011 05:12:00 PM