Tracy Loew of the Statesman Journal in Salem, Ore., is the winner of the $10,000 prize for community journalism in the National Journalism Awards sponsored by the Scripps Howard Foundation.

Loew and the 38,000-circulation Gannett Co. newspaper won for a 16-month investigation of widespread mismanagement during the past 10 years in the Willamette Education Service District, which serves rural and suburban schools south and west of Portland. "WESD's Web of Deals" had already "won the top investigative reporting prize for small newspaper markets in the Education Writers Association contest," the Statesman Journal reports.

Runners-up were Will Doolittle of The Post-Star in Glens Falls, N.Y., for "Showdown at Black Brook," an examination of conflicts between landowners and the Adirondack Park Agency, which earlier won the New York State Associated Press Association's first-place award in depth reporting; and Samantha Swindler and Adam Sulfridge of The Times-Tribune, circulation 6,000, in Corbin, Ky., for their investigation of a sheriff who was later indicted. 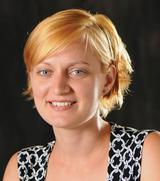 Swindler, right, is the winner of the Institute for Rural Journalism and Community Issues' 2010 Tom and Pat Gish Award for courage, integrity and tenacity in rural journalism. She now publishes weekly newspapers in, of all places, Oregon -- in Tillamook, 75 miles from Salem. The institute, which publishes The Rural Blog, is the repository for entries in the Community Journalism category of the National Journalism Awards.

Another Gannett newspaper that has a significant rural audience, the Burlington Free Press in Vermont, won the First Amendment category of the National Journalism Awards "for its aggressive editorial stance that made open government a paramount issue in the 2010 elections and spurred reforms," Scripps said in its news release about the awards. The paper (32,000 circulation, 42,000 Sunday) beat out finalists from much larger papers, the St. Petersburg Times and The Washington Post.
Written by Al Cross Posted at 3/19/2011 03:22:00 PM