A rural newspaper in Connecticut and another one serving rural communities in California made this year's list of "10 Newspapers that Do It Right" from Editor & Publisher magazine.

The Register Citizen of Torrington, Conn., pop. 35,000, won recognition for tearing down the walls between its newsroom and the public with the Newsroom Cafe, where folks sip coffee, munch pastry, use wi-fi, talk with staffers, comment on just-published stories and suggest others. "The public is even invited to daily story meetings, which are streamed over the Internet with live chat," report Kristina Ackermann and Deena Higgs Nenad.

"It has generated a slew of story ideas and has even convinced a stingy advertiser to buy digital space for the first time," E&P reports, citing Publisher Matt DeRienzo, who told the magazine: "It's like social media. It peels back the curtain like the Wizard (of Oz) ... the great and powerful newspaper how it used to be." Well, actually, Toto pulled back the curtain to reveal the wizard, but we get the point.

The 8,000-circulatiion daily is owned by Journal Register Co., which emerged from bankruptcy with a new motto, "Digital First," and a goal of $40 million profit in 2010. "You hit more than $41M," CEO John Paton told employees in his Digital First blog, announcing that all would get an extra week's pay. "Not bad for a bankrupt, beat-up, old newspaper company people had written off as dead in 2009. But we didn’t write ourselves off. We picked ourselves up and got working. We learned to harness both cloud and crowd. Using new tools and working the new news ecology we produced new digital products and revenue streams AND reduced costs. We focused on what we do best and linked to the rest." 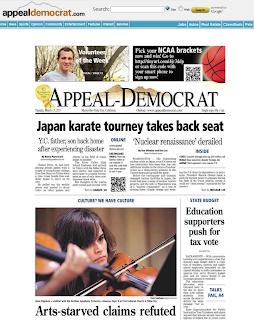 E&P also recognized The Appeal-Democrat of Marysville and Yuba City, Calif. The cities have a combined population of 72,000, and Yuba and Sutter counties 162,000, but are the hub of farm country and Sierra Nevada foothills north of Sacramento. Last year the Freedom Communications paper went big on multimedia, started using QR codes, "bar-type codes that enable smartphone users to link content, enter online contests, and view photos," and teamed with the two cities' chambers of commerce "to produce nearly a dozen political forums during the primary and general elections last year," E&P reports. "Employees, including the editor, lugged the necessary equipment to various locations so they could do live webcasts and live blogging. Total video views and visits to the Appeal-Democrat website exceeded 15,000 in a month." (Read more)
Written by Al Cross Posted at 3/15/2011 11:53:00 PM