There are two Kentuckys: rural, where very few gay and lesbian people live; and urban, where 2010 Census found more than 10 same-sex couples per 1,000 households, compared to the state average of 7, reports Jacalyn Carfagno of WEKU News in her two-part series about the state's lesbian, gay, bisexual and transgender community.

LGBT people living in rural areas are obvious targets, Carfagno reports, citing an incident in Hazard in which two gay men were asked to leave a public pool, and one in Harlan where a lesbian couple reported being beaten by a group of men because of their sexual orientation. The latter incident caused the Kentucky Equality Federation, a non-profit promoting equality for LGBT people, to designate seven mountain counties in southeastern Kentucky a "special operating region" in which to "raise awareness about hate crimes based on sexual orientation and the group’s mission, intercede on behalf of victims of discrimination and hate crimes," Ralph Davis reports in the Hazard Herald. 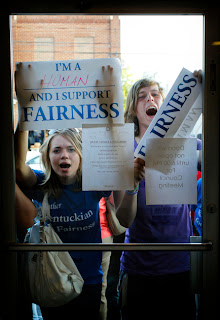 Gays and lesbians in rural Kentucky lack protections of anti-discrimination "fairness" ordinances passed in urban centers of the state. In Berea, a college town of 13,000 where the state's Bluegrass region meets Appalachia, the city council has rebuffed activists' request to include LGBT people in a broader human-rights ordinance that is awaiting passage. Peter Smith of The Courier-Journal reports the activists have planned a rally today to urge the council to add sexual orientation to the list of protected minorities. If they prevail, Berea would be the only Kentucky city outside Northern Kentucky, Lexington and Louisville to have such an ordinance. (Read more) UPDATE, Sept. 21: The council voted last night for a human rights ordinance and commission to enforce it, but not to include sexual-orientation discrimination. Some council members said that would be considered later. For Smith's update, click here. For an on-the-scene report from Greg Kocher of the Lexington Herald-Leader, go here. (Herald-Leader photo of protesters by Mark Cornelison)

Berea is in Madison County; the county seat of Richmond, a larger town and home to Eastern Kentucky University, has declined to pass a fairness ordinance. This Friday 17 businesses on or near Main Street will "show support for local anti-discrimination protections in employment, housing, and public accommodations based on perceived sexual orientation and gender identity," Business Lexington reports.
Written by Ivy Brashear Posted at 9/20/2011 12:51:00 PM