Illinois officials are out to get the Asian carp, and hunger, simultaneously 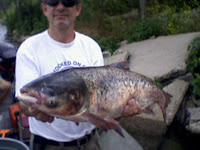 Asian carp keep swimming to the surface of the news, as people along the Great Lakes and the Illinois River try to decide how to deal with the invasive fish. To keep them out of the lakes, perhaps ruining their fisheries, officials have tried to use electric shock; now others are placing the fish on "invasivore" dinner menus. In Illinois, the state Department of Natural Resources hopes the fish can be removed from the Mississippi, Illinois and Ohio rivers and served in food banks and kitchens across the state.

Pamela King of Greenwire reports that the campaign, Target Hunger Now, builds off the 30-year-old Illinois Sportsmen Against Hunger program in which hunters donate a portion of their venison harvest to poor families through independent processors and distributors. Through Target Hunger Now, the state agency contracts anglers to catch Asian carp and handles processing and distribution.

Tracy Smith, director of a partner organization to Target Hunger Now, Feeding Illinois, told King the public has been receptive to the idea of eating Asian carp. The fish are rich in protein, a nutrient often overlooked by struggling families during hard times. However, a spokesman for the agency told King this solution is a short-term one; they are looking for a way to completely eradicate the fish.
Written by Ivy Brashear Posted at 9/20/2011 11:17:00 PM