La Nina, the weather phenomenon that cools the Pacific and warms the center of North America, is causing a year-long drought in the Southern Plains, and its return could prolong the toughest season farmers say they've ever seen.

The National Oceanic and Atmospheric Administration says the drought could become a multi-year event. Brian Fuchs, a climatologist with the National Drought Mitigation Center, told Tiffany Stecker of Environment & Energy News that recovering from severe droughts is a slow process, and the fear is that a multi-year drought would have dire consequences on farmers in the Southern Plains. Here's an interactive map illustrating the drought: 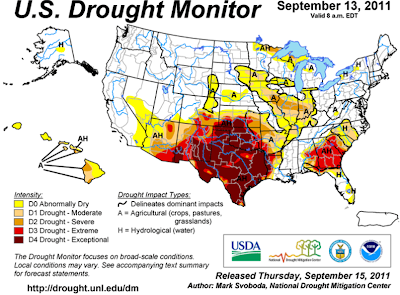 The drought has already caused damage in several states and is keeping farmfor the year ers from planting crops at the proper time. Stecker reports that Texas agriculture has already suffered $8.7 billion in losses, with $2.3 billion in the state's leading cash crop, cotton. Growers in Oklahoma report being 15 to 20 inches short of rain for the year and wheat farmers are finding it difficult to plant at all. (Read more)
Written by Ivy Brashear Posted at 9/21/2011 01:07:00 PM