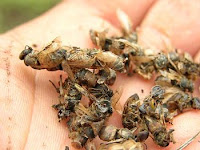 A new study indicates that the wave of colony collapse disorder, or the mass die-off of honey bees, is linked to the coating of seed corn with some of the world's most widely used insecticides. The research may lead to more answers about how to curb or reverse the phenomenon, reports Alexandra Ludka of ABC News. The study, "Assessment of the Environmental Exposure of Honeybees to Particulate Matter Containing Neonicotinoid Insecticides Coming from Corn Coated Seeds," was published in the American Chemical Society’s Environmental Science & Technology journal.

The insecticide is popular because it kills "insects by paralyzing nerves but has lower toxicity for other animals," the report states. Ludka writes beekeepers noticed die-offs around the time corn is planted, adding researchers thought the die-offs were caused by particles of insecticide that were released into the air by machines when the chemicals were sprayed. Researchers tried to find a way to make machines safer for bees, but found all methods that used insecticide-coated corn seeds continued to cause colony collapse disorder. (Read more)
Written by Ivy Brashear Posted at 3/19/2012 03:27:00 PM