Santorum says he's the one for rural America 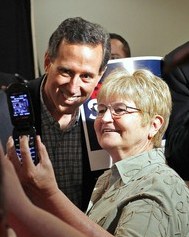 As Republican presidential candidate Rick Santorum seeks votes in Illinois, where a primary tomorrow could be pivotal, he has cast himself as the rural candidate, Sarah Wheaton and Rich Oppel Jr. of The New York Times report in a story headlined, "Santorum Takes On Urban America." (Photo by José M. Osorio, Chicago Tribune: Santorum in Rockford)

"Because many of the nation’s small towns are suffering economically, Mr. Santorum’s approach means he is taking on his own party," they write, quoting the former senator from Pennsylvania: “Think about it, look at the map of the United States — blue being the Democrats, red being the Republicans — it’s almost all red. Except around the big cities. And yet when you look at the economic plan that Republicans put forward, it’s all about tax breaks for higher-income individuals who live in those blue areas mostly.” Santorum says eliminating the corporate income tax on manufacturing would be a boon to non-metropolitan areas.

The reporters note, "In fact, Republican nominating contests tend to turn on the voting in suburban and rural areas, where the party is stronger, with Democrats much more dominant in the cities. Still, Mr. Santorum used the argument to suggest that he, rather than Mr. Romney, could motivate the Republican base to deliver the party a victory in the November general election." (Read more)
Written by Al Cross Posted at 3/19/2012 04:10:00 PM