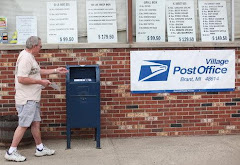 We reported in Janurary that the U.S. Postal Service was starting to contract with rural stores to restore some mail services in areas where stand-alone post offices are being forced to close as part of the agency's plan to pay down billions in debt. Ron Nixon of The New York Times reports the trend is accelerating. (NYT photo by Stephen McGee: Village post office at Nixon's Grocery, Brant, Mich.)

There are now 10 stores contracted to serve as "village post offices." Two more will open this week, and 26 others are under contract and waiting for equipment. The USPS says it's gotten requests from 600 other interested communities about setting up such offices. It has long allowed retailers to sell stamps, but at contract post offices customers can also mail letters and send packages.

The agency hasn't said how much it expects to save by using grocery stores, but has said that closing stand-alone branches will save $200 million annually. It also hopes to offer services in drugstores, retail chains and office supply stores. USPS officials say this will be a "win-win" for the agency and rural communities. (Read more)

In other postal closing news, Steve Hutkins of Save the Post Office reports that the USPS revealed total expected revenue losses from consolidating more than 200 mail processing centers during a Postal Regulatory Commission hearing this week. Market research commissioned by the USPS last summer shows the closures would cost the service $5.2 billion in revenue due to a 10.3 percent drop in first-class mail volume and a 7.7 percent drop in total volume. Hutkins says the agency initially said revenue loss would be far less: $1.3 billion. He speculates that when top USPS officials saw the $5 billion number, they commissioned a new study "apparently designed to elicit better, less damaging results."
Written by Ivy Brashear Posted at 3/22/2012 05:04:00 PM