Most child injuries and deaths on farms involve visiting children, not working ones 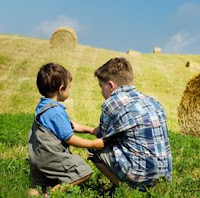 There's been much discussion lately about changing child farm labor laws to prevent injury and accidental death in children working on farms, and some of it has included political misinformation.

But as National Public Radio's Nancy Shute reports from a new study, 86 percent of deaths and 71 percent of injuries in children on farms were not work-related, and many of them were not "unique to farms." They include falls, ATV or other vehicle accidents, assault and suicide attempts, according to the study, published last week in the journal Pediatrics. (NPR photo)

About 84 children die each year in accidents on farms, and more than 26,000 are injured. The injuries are usually severe and the study found they cost about $1.4 billion a year. About one million children live on farms, according to the Centers for Disease Control and Prevention, which lists accidents with tractors, motor vehicles and drowning as the top sources of child farm deaths. Shute writes the injury numbers are consistent with other estimates of risks to children, but the dollar figure attached to them is new.

Purdue University professor William Field says most accidents involving children happen when a child visits a farm. Children who grow up on farms learn the hazards early, he said. "A lot of these cases involve a grandfather taking a grandchild for a ride in the field," he told Shute. "Those are some of the most depressing, sad circumstances." (Read more) A good source for information on farm safety is the National Farm Medicine Center.
Written by Ivy Brashear Posted at 3/22/2012 04:58:00 PM