The Environmental Protection Agency is preparing recommendations for managing small earthquakes triggered by oil and natural-gas waste-injection wells, Mike Soraghan reports for EnergyWire. The agency hasn't publicized its efforts, but has discussed them with state officials, researchers and interest groups. Scientists have known for decades that injection wells can cause minor earthquakes, but a series of quakes last year in Arkansas and Ohio raised public concern. The natural gas boom has also increased the need for new injection wells. (EPA map: Region 6 injection-site earthquakes over time periods; click on image for larger version) 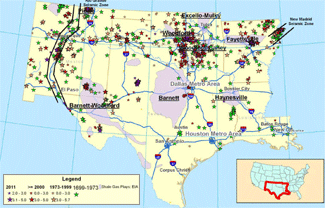 An EPA team, formally the Underground Injection Control National Technical Workgroup, is preparing the report, and an Ohio agency said it was "in press" last week. EPA officials at the Region 6 office in Dallas, which is handling the issue, declined to comment beyond saying, "EPA is working with states to develop recommendations and best practices to assess impacts to underground storage caused by seismic activity to assist state and EPA UIC programs."

EPA records show there are about 150,000 "Class II" injection wells across the country, Soraghan reports. There are about 500,000 other types of injection wells where nonhazardous waste is stored. "The Safe Drinking Water Act empowers EPA to regulate underground injection. But EPA often hands day-to-day regulation of it to states, including Arkansas and Ohio," Soraghan reports. The earthquake study began quietly in June, and Soraghan reports "The plan was to partner with state regulators and scientists at the U.S. Geological Survey, and solicit peer review at the end, according to the presentation slides. The presentation also noted that EPA's national study of hydraulic fracturing excludes examination of earthquakes." (Read more)
Written by Ivy Brashear Posted at 3/21/2012 01:46:00 PM