One of the more ambitious local projects we have heard of during Sunshine Week, which ended Saturday, was a local records audit by the Adair County Community Voice in Columbia, Ky. The weekly newspaper engaged eight "average citizens" to seek specific records from eight public agencies and published the generally good findings in last week's paper, with an explanation of the audit and the issues, and an editorial by Editor-Publisher Sharon Burton giving her motives. 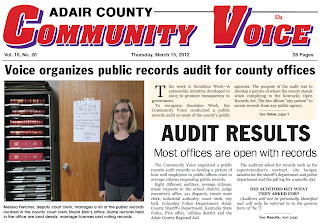 Burton wrote that since she started the paper 10 years ago, "We have seen a dramatic improvement in the understanding for openness and the cooperation we receive, so "We didn't do it to harass or put local officials on the spot," but rather "to get a better idea of where we are and where we need to continue educating and informing public officials and the public about the role of government."

The audit found the least cooperation when it asked local law-enforcement agencies for salary information. Burton told us in an email, "Our sheriff's department provided a copy of salaries with the names marked out. Numbers only. lol. Then the secretary called and said we made them sound bad. Love this job." The sheriff's department claimed that the auditor said he didn't need the names; "The auditor said he didn't specify that he needed the names," the story by Burton and Allison Hollon reports. The Kentucky State Police didn't reply to a mailed request.

The Voice does not put most news stories online, but we have posted its front page, Page 2 and Page 3 on the site of the Institute for Rural Journalism and Community Issues. If your newspaper conducted an open records audit for Sunshine Week, please let us know so you can be recognized, too.
Written by Al Cross Posted at 3/19/2012 01:01:00 PM