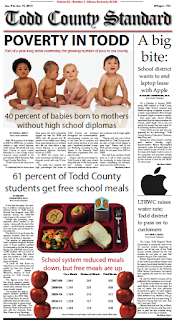 The Todd County Standard in Elkton, Ky., started a year-long series last week about the county's growing poverty rate. It's an issue that most community newspapers might shy away from, but the Standard is again proving why it has been judged the best small weekly newspaper in the state for six straight years. The county is not in Appalachia, as you might expect, but in southwestern Kentucky and the edge of the territory covered by the Delta Regional Authority.

"While our prospects for being able to attract manufacturers and the regional concept that has brought water, economic development and perhaps a regional job training center offer Todd County several ways to overcome poverty, the sad reality now is that we are in a state of crisis and we need to admit it," the paper opined. "With one of the highest rates of uninsured people in the state; with children in poverty on the rise; with one in three families on some sort of government assistance; with 40 percent of children born between 2007 and 2009 to mothers who do not have high school diplomas; with 61 percent of school-age children on free or reduced lunches there is more than enough information to make us concerned."

The paper will study Todd County's poverty to inform the public about it and discuss ways in which it can be addressed. The first two stories in the series appeared in the Jan. 9-15 edition, and cover babies born to mothers without high school diplomas and high rates of children receiving free or reduced-price school lunch. "Poverty is not a plague," the paper writes. "It is curable. It has been cured in other places, but the only way it can be cured is for people to become aware of its severity and then to care about poverty's demise." For the editorial and the stories in the first installment of the series, click here.
Written by Ivy Brashear Posted at 1/16/2013 02:38:00 PM