Obama would boost local police and mental health; guide shows where solons have been on gun issues

President Obama's plan for reducing gun violence, announced today, calls for new funding to employ local police officers and for improving mental health care services, which could help rural areas that lack police protection and where mental health care is often out of reach because of lack of facilities and providers.

The plan calls for expanding the COPS Hiring Grants, which help police departments hire officers to be school resource officers. The Department of Justice will be ordered to give preference to grant applications that support such school officers. The COPS program has helped rural police departments hire officers they likely wouldn't be able to hire without it because of small budgets.

The mental-health section of the plan calls for creating programs to train educators to identify mental illness in children and teens and how to refer them for treatment, and for $25 million for state-based initiatives to support people aged 16 to 25 who have mental health or substance abuse issues. An additional 5,000 mental health care professionals would be trained to serve youth under the plan, and insurance coverage for mental health issues would be required, including those covered by Medicaid.

Key parts of the plan would require background checks for all gun sales, increase penalties for gun trafficking, end the freeze on gun-violence research and pay for more school counselors. Its most controversial parts would ban military-style assault weapons and ammunition magazines with more than 10 bullets. "There are strong indicators that any comprehensive legislation restricting weapons and ammunition won't even see a vote on the House floor," Jonathan Martin and Jake Sherman of Politico report. Republican representatives from the Midwest and Northeast told Martin and Sherman they have "almost zero appetite to vote on any sort of sweeping gun bill." (Read more) 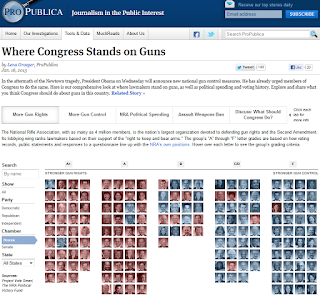 To give easy glimpses of where your senators and representative(s) have stood on these issues, and with the main lobbying interests, the independent, investigative journalism outlet ProPublica has created an interactive graphic showing how each lawmaker is rated by the National Rifle Association and the Brady Campaign for gun-control laws, with a chart of current members' votes on the 1994 assault-weapons ban and an accounting of the NRA campaign contributions to each legislator, available here.
Written by Ivy Brashear Posted at 1/16/2013 02:01:00 PM