Private citizens aren't waiting on anyone to restore their land to prairie; they're doing it themselves 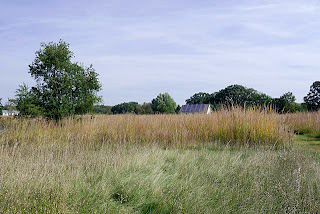 Some rural residents have joined the cause of restoring U.S. prairie through conservation methods on their own property, from city yards up to hundreds of acres around their homes, Rebecca Kessler of Yale Environment 360 reports. Government agencies and conservation groups have been trying to restore prairie across large swaths of the U.S. and Canada for years, but the private landowners are helping on a much smaller scale, sometimes creating prairie where there wasn't any before. (Yale Environment 360 photo: Restored prairie in Michigan)

Nearly 600,000 square miles of the country's midsection, from Canada south to Texas and from Indiana west to Colorado, was once prairie. But European settlement, farming and development have significantly reduced this "iconic American landscape," with less than 1 percent of its former range still intact, Kessler reports. According to the National Park Service, U.S. prairie lands are one of the world's most endangered ecosystems.

The hub of private citizen intervention is in Iowa, southwestern Wisconsin, northern Illinois and Minnesota, Kessler learned from University of Northern Iowa's Daryl Smith, the director of the Tallgrass Prairie Center, and said the prairie in those areas is the most precious because it is so scarce. There are so many government agencies, conservation groups and businesses involved, that "no one seems to have a bird's-eye view of just how much prairie is being restored on private land," Kessler reports. No record is kept of private restoration, but Smith told Kessler "there's definitely been increasing numbers each year of prairie plantings" on private land.

Prairie restoration "can be labor-intensive and technically challenging," Kessler writes. "People are educating themselves on the intricacies of grassland ecology, planting genetically modified 'Roundup Ready' crops so they can blitz the soil clear of invasive species’ seed before sowing prairie plants, and bringing in heavy equipment to drill, till, spray and seed. They are setting fire to their land to mimic nature’s way of keeping trees out and replenishing soil nutrients. In some places, they are banding together to swap work on one another’s properties, which one Wisconsin prairie buff likened to the barn raisings of years past." And they are doing it all on their own, without the help of government or conservation groups. (Read more)
Written by Ivy Brashear Posted at 1/04/2013 01:22:00 PM