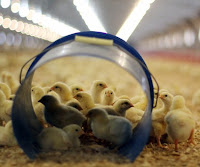 Consumers wary of the use of antibiotics in animal feed, which some studies have recently shown can decrease the effectiveness of antibiotics to fight illness in humans, might be interested to hear that some farmers and livestock producers have turned to more environmentally friendly and organic ways of doing business. At least one Pennsylvania poultry farmer is profiting from a more organic way of producing chickens: mixing his feed with oregano oil and cinnamon. And he says more farmers should try his method, Stephanie Strom of The New York Times reports. (NYT photo by Jessica Kourkounis)

It's a combination Scott Sechler, owner of poultry producer Bell & Evans, swears by as a way to fight bacterial diseases without resorting to antibiotics,  reports Strom. Products from Bell & Evans "have long been free of antibiotics," which has contributed to its financial success. Skeptics of herbal medicine for livestock are quick to call the technique effective, Strom writes. "There isn't any evidence [to support the use of oregano oil], there are too many unanswered questions and the only proponents for it are the ones producing it," Science-Based Medicine writer and pharmacist Scott Gavura told Strom. Sechler said nothing Bell & Evans used so far to fight disease has worked as well as his mix of oregano oil and cinnamon.

Sales of organically raised, antibiotic-free meat totaled $538 million in 2011, according to the Organic Trade Association. That's just a small fraction of the U.S. meat market, but some retailers say they can't keep antibiotic-free meat on the shelves. And a nationwide Consumer Reports National Research Center telephone survey of 1,000 adults in March revealed that 60 percent of people surveyed said they would pay at least 5 cents more per pound for antibiotic-free meat. (Read more)
Written by Ivy Brashear Posted at 1/04/2013 02:15:00 PM