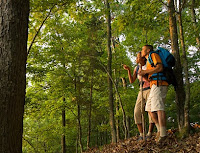 Those who appreciate rural places already know this, but a study has found that spending time fully immersed in nature can improve creativity and problem-solving. "Little is known about the human brain on technology, but many social psychologists fear that so much 'screen time' is rewriting our neural circuitry, and not for the better," Kevin Redmon of Pacific Standard magazine reports. Researchers wanted to find a tangible measure of how nature impacted the brain to counteract technology's sometimes negative impacts, something that had previously been unavailable. (Kentucky Tourism photo)

David Strayer, a professor of cognition and neural science at the University of Utah, and University of Kansas psychologists Ruth and Paul Atchley worked with Outward Bound to complete their experiment. Fifty-six students were asked to complete neural wordplay activities known as remote associates tests. Half the students took the tests before a camping trip, and the other half took them about midway through the trip. Students who took the tests after four days in the woods scored 50 percent higher then their peers. "Current research indicates that there is a real, measurable cognitive advantage to be realized if we spend time truly immersed in a natural setting," the authors write. The study, "Creativity in the Wild: Improving Creative Reasoning through Immersion in Natural Settings," was published in this month's issue of Plos One. (Read more)

The findings should be no surprise in New England, the New Hampshire Union Leader editorial board opines. "Most Granite Staters know that living among the hills, rivers, forests and mountains is good for the soul and body," the editorial states. "We also know what it can do for our peace of mind. Now scientists are confirming that it can improve creativity, attention span and mental function. Nice of them to catch up to us."
Written by Ivy Brashear Posted at 1/03/2013 01:25:00 PM