"The U.S. Department of Justice is investigating how Chesapeake Energy pays landowners for the natural gas it drills on their property, according to disclosures made earlier this month in the company's filings with the Securities and Exchange Commission," reports Abrahm Lustgarten of ProPublica. In March, financially-strapped Chesapeake was accused of raising $5 million by cheating landowners out of royalties, and for years landowners have complained of being underpaid.

"In lawsuits filed in several states, Chesapeake has been accused of inflating its operating expenses and then deducting those expenses from the share of income it pays for the right to drill on peoples' land," Lustgarten writes. "Chesapeake has paid hundreds of millions of dollars in judgments and to settle some of these cases."

In 2013, Pennsylvania landowners said their payments were cut by as much as 97 percent, from thousands of dollars a month to less than one dollar, Lustgarten writes. That led to probes from the state's Attorney General.

A ProPublica investigation found "a series of complicated corporate transactions, worth nearly $5 billion, in which Chesapeake sold its pipelines for an inflated price, but then signed long-term contracts to pay the pipelines' new owner exorbitant fees to continue to use them," Lustgarten writes.

"While Chesapeake raised billions through the sale, it committed to repay all of that money and more in fees," Lustgarten writes. "The fees Chesapeake paid to the new company, called Access Midstream Partners, were then charged back to landowners, erasing much of their share of the economic bounty from the surge in natural gas drilling in the Marcellus Shale. At the same time that landowners' gas income dropped, Chesapeake was attempting to raise cash to rescue itself from enormous and mounting corporate debt." (Read more) (Chesapeake Energy map) 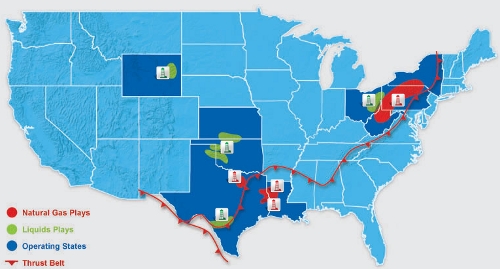