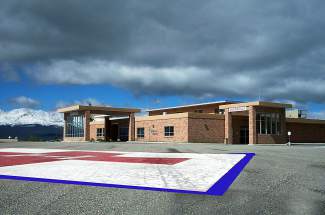 After being open for 135 years, a 25-bed rural hospital in Leadville, Colo., is closing its doors, Alli Langley reports for Vail Daily, about 48 miles north of Leadville. St. Vincent Hospital (right) announced "on its Facebook page Saturday that it will phase out its services during the next few months and no longer serve the roughly 7,300 people who live in Lake County."

Earlier this year, a story in the local newspaper, the Herald Democrat, reported allegations of a hostile work environment at St. Vincent. Employees estimated that 29 nursing staff members—a 100 percent turnover rate—quit from December 2012 to February 2014, when the story was published.

"Because of a broken heating system that didn’t meet code, the long-term care unit shut down Monday," Langley writes. "About a dozen elderly patients living at the hospital were forced to move out, and the hospital has helped place them in other nursing home facilities. The closest ones to Leadville are in Salida, Kremmling, Grand Junction and the Front Range."

"The surgery department will close this week, and the hospital’s home oxygen, home health and physical therapy services and its general practice clinic will close in January," Langley writes. "Hospital administrators are talking with local governments to see whether they can take over ambulance services, which likely would increase costs to patients, and the emergency department and its support services will be the last to shut down." The entire building is scheduled to be closed by March 31, 2015. (Read more)
Written by Tim Mandell Posted at 11/20/2014 04:49:00 PM