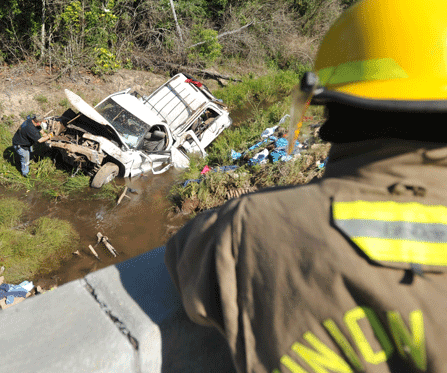 A long-held fear in Mississippi that equipping rural law enforcement with radar guns will lead to speed traps has prevented sheriff's departments and local police from gaining permission to use the devices to catch speeders on rural roads, Andrea Williams reports for WTOK Newscenter 11 in Meridian, Miss. Law enforcement officials, who say radar guns would help catch speeders on dangerous roads and make roads safer, are pushing for legislators to change the law. (Associated Press photo by Ryan Moore: Mississippi has one of the highest rates of roadway deaths in the U.S.)

"The Mississippi Code of 1972 prohibits county sheriff departments from using radar to clock speeders. The devices are only used by most city police departments and the Mississippi Highway Patrol," Williams writes. The Mississippi Sheriffs Association has for years tried and failed to lobby lawmakers for the right to use radar to identify speeders on county roadways."

The issue is expected to come up again during this year's session, Williams writes. House Speaker Pro Tem Greg Snowden (R-Meridian) told Williams, "We have so many good roads now around our county where you can drive about as fast as you dare if you're not obeying the law; we have so many young people out there that are doing that. My own opinion is that rural radar would probably be a good thing in the hands of an effective law enforcement agency."

Nationally, traffic fatalities on rural roads rose between 2011 to 2012—from 17,769 to 18,170—according to the U.S. Department of Transportation. Mississippi had 630 fatalities in 2011 and 582 in 2012, the largest drop of any state. But 25 percent of Mississippi's rural roads are in poor shape, ninth worst in the nation, says a report by The Road Information Program, funded by lobbies interested in highways and their safety.
Written by Tim Mandell Posted at 1/29/2015 04:14:00 PM