The state of child vaccinations: Some largely rural states above national average, some below

Which states are the best at getting toddlers their recommended vaccinations? While 70.4 of U.S. children ages 19 to 35 months have received all Centers for Disease Control recommended vaccinations, several states, including some with large rural populations, are well above the national average, including Mississippi and Alabama, two states generally at the bottom of most health statistics, Christopher Ingraham reports for The Washington Post. (For an interactive version click here) 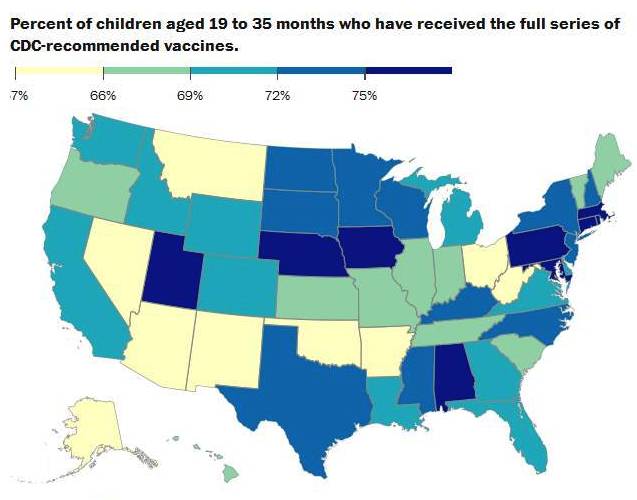 Many states are also not prepared to prevent and control infectious diseases, says a study by Trust For America's Health, reports the Robert Wood Johnson Foundation. The study found that only 14 states vaccinated at least half their population for season flu, "38 states met the national performance target of testing 90 percent of reported E.coli cases within four days" and 37 states "have in place the necessary reporting requirements to help prevent further transmission of HIV."

The study, which looked at 10 indicators to measure areas of high priority and concern, found that only 27 states and Washington D.C. "met or exceeded the average score for Incident Information and Management in the National Health Security Preparedness Index." (Read more)
Written by Tim Mandell Posted at 1/30/2015 12:55:00 PM