While coming to the conclusion last year that no link existed between oil and drilling and a rise in the state's seismic activity, University of Oklahoma officials sought a $25 million donation from billionaire oilman Harold Hamm—the top donor to the university—to build "The Continental Resources Center for Energy Research and Technology," Mike Soraghan reports for EnergyWire. OU never got the money, and the university's Oklahoma Geological Survey (OGS) has since reversed its stance, saying "that most of the quakes are 'very likely' triggered by oil and gas activities." 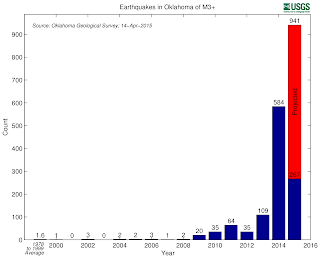 An email released earlier this year revealed that OGS officials have suspected since 2010 a link between oil and earthquakes. Oklahoma led the lower 48 states in earthquakes with 585 of magnitude 3 or higher in 2014, more than the state had in the previous 35 years combined. (U.S. Geological Survey graphic: Oklahoma earthquakes since 1978)

OGS "veered toward linking the seismic swarms to oil and gas drilling in the fall of 2013 when it joined in a U.S. Geological Survey statement about the rising earthquake hazard in the state," Soraghan writes. "But after that, state seismologist Austin Holland was summoned to 'coffee' with Hamm in the office of university President David Boren. Hamm has said that he was actually concerned about Holland's research linking quakes to hydraulic fracturing and was not trying to bully him."

"After the coffee meeting, Hamm continued to press Boren on man-made earthquakes, according to emails obtained by EnergyWire," Soraghan writes. "Hamm urged Boren to prohibit Holland from talking to reporters about quakes and instead have the university's spokeswoman handle such questions. When The New York Times wrote about Oklahoma earthquakes in December 2013, he forwarded the story to Boren with a note: 'This situation could spiral out of control easily.'"

Hamm also told OU officials he wanted people fired over the incident, Soraghan writes. Larry Grillot, retired dean of the Mewbourne College of Earth and Energy at the University of Oklahoma, wrote in an email to university colleagues, "Mr. Hamm is very upset at some of the earthquake reporting to the point that he would like to see select OGS staff dismissed."

Hamm also offered to be on the search committee to replace the OGS director, who was retiring, Soraghan wites. Hamm, who wasn't put on the search committee, indicated to Grillot that he would be "visiting with Governor [Mary] Fallin on the topic of moving the OGS out of the University of Oklahoma." (Read more)
Written by Tim Mandell Posted at 6/24/2015 02:49:00 PM