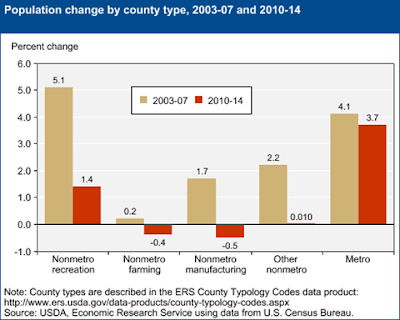 Counties that rely on tourism and retirees are still growing but at a lesser rate, dropping from a growth rate of 5.1 percent from 2003-2007 to 1.4 percent from 2010-14, the report says. The oil and gas boom has spurred rural population growth in North Dakota, Texas, Montana and Pennsylvania.

Some of the biggest rural population declines occurred in the East, the report says. "For example, most metro counties in South Carolina maintained above average population growth through the housing crisis and recession, but non-metro areas switched from 2.1 percent growth during 2003-07 to -0.36 percent decline since 2010. Extensive areas of population decline also emerged along the North Carolina-Virginia border, in southern Ohio, and throughout New England." (USDA map) 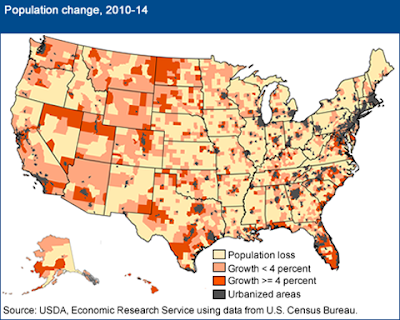