State bans on same-sex marriage are unconstitutional, the U.S. Supreme Court ruled in a 5-4 decision today, meaning that gay couples in 13 states where same-sex marriage was illegal—mostly in states with large rural populations in the Midwest and South—can now marry, Ana Swanson reports for The Washington Post.

Justice Anthony Kennedy wrote in the majority opinion, “The court now holds that same-sex couples may exercise the fundamental right to marry. No longer may this liberty be denied to them." The 13 states were same-sex marriage was illegal were: North Dakota, South Dakota, Nebraska, Texas, Louisiana, Arkansas, Missouri, Mississippi, Georgia, Tennessee, Kentucky, Ohio and Michigan. There are 390,000 same-sex married couples in the U.S. and another 70,000 couples living in the 13 states where same-sex marriage was illegal who would get married in the next three years, according to UCLA's Williams Institute. About one million same-sex couples, married and unmarried, live together in the U.S. (New York Times map; click here for interactive version with county data) 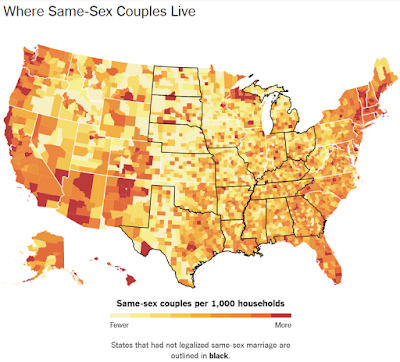 The court ruled in cases from Kentucky, where "voters by a 75 percent margin in 2004 approved a constitutional amendment saying that 'only a marriage between one man and one woman shall be valid or recognized as a marriage' in the state, and in a recent Bluegrass Poll more than half of registered voters continued to oppose it," Andrew Wolfson notes for The Courier-Journal in Louisville. Democratic Gov. Steve Beshear's "administration has spent $195,400 defending Kentucky's ban in court," after Attorney General Jack Conway, the Democratic nominee for governor, declined to appeal a lower-court ruling against it, Linda Blackford reports for the Lexington Herald-Leader. One of the plaintiffs was Tim Love, so one of the cases decided by the court was Love v. Beshear.

"Gay Americans still face disparities on issues like workplace and housing discrimination, hate crime and anti-bullying protection and adoption rights," Jacob Bogage writes for The Washington Post. His story is accompanied by a map drawn by the Movement Advanced Project, "a think tank that researches LGBT policy. The group created a metric to quantify a state's policies toward the LGBT community."