County-level map shows that Americans are on the move; 15% of U.S. families moved in 2014

County-level data shows that Americans are on the move, Tim Henderson reports for Stateline. About 15 percent of families moved in 2014, up from 11 percent during the recession but down from pre-recession numbers of 17 percent. Kimball Brace, president of Virginia-based Election Data Services, told Henderson, “The recession kept people at home. They couldn’t sell their home; they couldn’t find a job. We’re starting to see bigger numbers. We’re not all the way back.”

While some of the biggest moves have been to or from metro areas, some rural areas have seen an influx of migration led by the oil boom in North Dakota, where McKenzie County had an 18.3 percent increase in population from 2013 to 2014. (Stateline map: Where moves affect population. For an interactive version, click here) 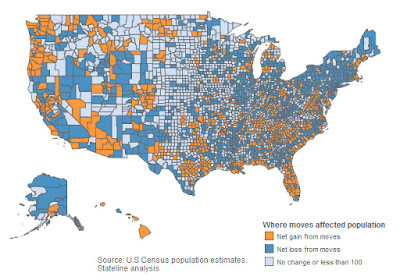