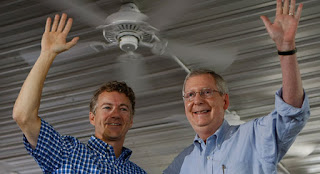 Senate Majority Leader Mitch McConnell and Sen. Rand Paul, Republicans from Kentucky, have been twisting the facts of court cases to make the Environmental Protection Agency's Waters of the U.S. (WOTUS) rules appear to be more damning than they are, Dave Levitan reports for FactCheck. (Associated Press photo: From left, Sen. Rand Paul and Sen. Mitch McConnell)

Paul recently said at a dinner: "Over 40 years, we now define pollutants as dirt and your backyard as a navigable stream. It would be funny if we weren’t putting people in jail for it. Guy named Robert Lucas, down at the southern part of Mississippi, 10 years ago was 70 years old. He was put in prison for 10 years. He just got out. Ten years without parole. Ten years without early release. He was convicted of a RICO conspiracy [under the Racketeer Influenced and Corrupt Organizations Act]. RICO’s supposed to be something you go after gangsters for. You know what his conspiracy was? Conspiracy to put dirt on his own land. We’ve gone crazy."

In truth Lucas and his associates were charged with 41 counts—convicted of 40—of violating the Clean Water Act, conspiracy and fraud, Levitan writes. Lucas, who is actually 75 now and served seven years in prison before going to a halfway house, had been warned as far back as 1996 by the Justice Department that the 2,620-acre plot he was developing for low-cost housing contained wetlands and could not be used for housing. He received a long list of warnings "of the public health threat he and his partners were creating by installing septic systems in saturated soil," before finally being charged in 2004.

McConnell and Paul also co-wrote an op-ed piece in the Lexington Herald-Leader on June 16 that twisted facts, Levitan writes. They wrote: "A cautionary tale can be found in the story of Andy Johnson, a farmer who built a stock pond on his eight-acre Wyoming farm. He spent hours building it and filling it with fish, ducks and geese. Now the EPA is claiming that he violated the Clean Water Act by building the pond without a permit and is threatening to fine him $75,000—a day."

Levitan writes, "This description sounds as though Johnson simply dug a hole and added water. In fact, the Army Corps of Engineers and the EPA found that in order to create the pond, he constructed a dam on Six Mile Creek, a waterway deemed by the EPA to be a tributary of the Blacks Fork River, which in turn is a tributary of the Green River, which is a 'navigable, interstate water of the United States.'"

"Building the dam constituted a 'discharge of pollutants' into 'waters of the United States,' according to the EPA and the Army Corps of Engineers, and thus required a permit that Johnson did not have, or seek," Levitan writes. "As with the Lucas case, EPA officials say that Johnson received multiple warnings before any enforcement actions were taken."
Written by Tim Mandell Posted at 6/29/2015 01:04:00 PM