The study also found that the "average real value of grants from large foundations to organizations based in non-metro counties from 2005 to 2010 was about $88 per capita (in 2010 dollars), less than half the average given to organizations in metro counties." Researchers "found that differences in educational attainment and in the capacity of local nonprofit organizations account for a substantial share of the variation across counties in grants per capita."

The report found that "rural grants are more likely to go to education, environmental protection and recreation than urban grants," Tim Marema reports for the Daily Yonder. "Conversely, rural organizations are less likely than urban ones to receive grants to support arts and cultural activities; philanthropy and volunteerism; and medical research."

Researchers said that "part of the difference in both the size and type of grants awarded to rural projects has to do with local capacity," Marema writes. Researchers "found that counties that had organizations like universities with higher fundraising ability tended to raise more money from private foundations. And counties with more nonprofit infrastructure tended to receive more philanthropic dollars." (USDA map) 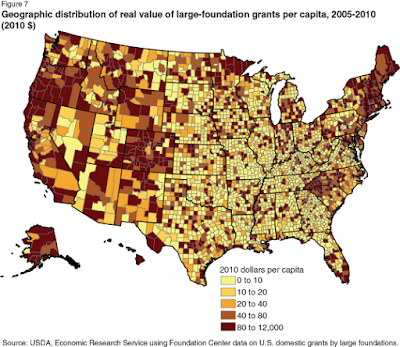