States are struggling to provide care for the rural hidden homeless—people who go unseen because they're living in the woods, tents, campers, sheds, barns or occasionally on a friend's couch when it's available—and who lack the transportation to find shelters, medical care for mental illness, counseling or food vouchers, Teresa Wiltz reports for Stateline.

Wendy Kinnear, regional coordinator for the state of Pennsylvania’s Education for Children and Youth Experiencing Homelessness program, told Wiltz, “My frustration is that this isn’t something that people talk about. We don’t get the same funding and support. People are being undercounted—which means they’re not getting the services and funding that they can be tapping into.” (Geography of Homelessness graphic) 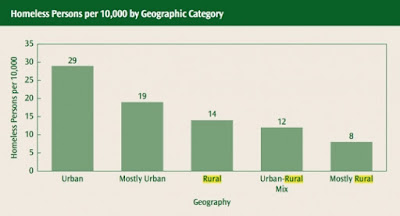 Some states are trying to address the needs of the rural homeless, Wiltz writes. "In Colorado, the Coalition for the Homeless runs a rural initiatives program, collaborating with 14 rural agencies to provide transitional housing, counseling, support, permanent housing and rental assistance."  In July, Virginia, "which has a large rural population of nearly 2 million, will launch its Housing Trust Fund to encourage affordable housing."

But in some state efforts haven't worked, Wiltz writes. "In North Dakota, where homelessness has skyrocketed after the oil boom created a housing shortage, legislators created a Housing Incentive Fund, allocating $35 million in 2013 to encourage the development of affordable housing. But that fund was depleted within five months."

The problem is that more money goes to fight urban homelessness, which is more visible than rural homelessness, Wiltz writes. Population determines where U.S. Department of Housing and Urban Development funding goes. "In rural areas, there are fewer continuums of care (CoC), local, community-based organizations that are responsible for coordinating aid for the homeless, usually with federal funding distributed by the states. Fewer CoCs means fewer homeless people are being served, Kinnear said."

"HUD set aside $30 million for a competitive grant to tackle rural homelessness. But the agency didn’t get enough applicants to send money to rural areas, according to Ann Oliva, director of HUD’s Office of Special Needs Assistance Programs," Wiltz writes.
Written by Tim Mandell Posted at 6/29/2015 01:06:00 PM