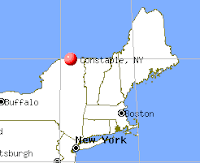 Some of the 1,400 residents of Constable, N.Y., (City-Data map) say the rural town near the Canadian border is so quiet and safe that they don't even bother to lock their doors. But over the weekend, Constable residents were at the center of one of the nation's greatest man hunts, when escaped murderer David P. Sweat was captured in their midst, Charity Vogel and T.J. Pignataro report for The Buffalo News.

Verba Bontrager, who has lived for nine years on a dairy farm near where Sweat was shot and taken into custody on Sunday, told the News, “I never dreamed it would be this close. It wasn’t on our property, but it was right on the edge. . . . It’s kind of a shock to me . . . We heard a couple of shots; then the police cars started coming. We didn’t know exactly what was happening. After the shots, people were here, I couldn’t believe how fast. Thirty or 40 cars.”

Retired middle school teacher James L. Fleury called Constable a "very quiet town." He told the News, "Everybody knows everybody . . . This is the biggest event—that I know, in my lifetime. I’m very grateful that it’s over.” 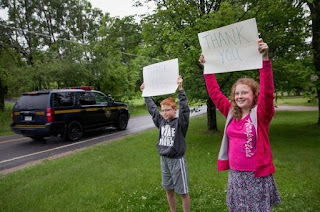 D. Billy Jones, the county’s legislative chairman, "described the area as less mountainous than the southern part of Franklin County with wooded areas, fields and farmland," Vogel and Pignataro write. Jones told her, "People were obviously on edge. We had a long night last night [Saturday], hoping they closed in on him. It’s been a little surreal round here. Our residents have put up with a lot. It’s been very tense, very emotional. Think there will be a lot of people tonight [Sunday] that will get a good night’s rest.” (Getty Images: Seth Lockwood, 10 and his sister Riley,12, give thanks to law enforcement officials following the capture of convicted murderer David Sweat on Sunday)
Written by Tim Mandell Posted at 6/29/2015 01:04:00 PM