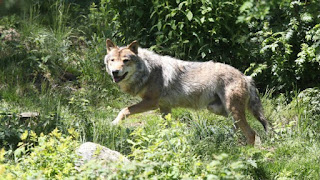 The U.S. Fish and Wildlife Service announced on Tuesday that it will not reclassify the gray wolf from endangered to threatened, a move that conservationists hoped would discourage Congress from removing protections altogether, Devin Henry reports for The Hill. Some Congressional members have pushed for legislation to declassify the wolves, saying they threaten ranching operations. (Getty Images: Gray wolf)

The wolf is currently classified as endangered "throughout its habitat in the lower 48 states, except for Minnesota, where it’s listed as threatened, and in Montana, Idaho, Washington and parts of Oregon, where there are no Endangered Species Act protections, according to the Humane Society," Henry writes.

Conservationists petitioned in January to have the wolves classified as threatened, Henry writes. Fish and Wildlife said in a statement that the petition “does not present substantial information indicating that reclassification may be warranted” and that it “failed to provide substantial information indicating these wolves may meet the definition of a threatened species, specifically are likely to be in danger of extinction within the foreseeable future throughout all or a significant portion of their ranges." (Read more)
Written by Tim Mandell Posted at 7/02/2015 02:13:00 PM