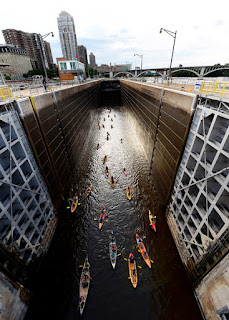 Last month federal officials "closed the Mississippi River shipping lock at Upper St. Anthony Falls in Minneapolis in hopes of stopping the spread of invasive carp," reports the St. Paul Pioneer Press. "A shipping lock can allow the fish to reach waters above a dam, so closing the lock is seen as one of the most effective barriers to halt the carp's march upstream. The fish has yet to establish itself in Mississippi River waters in Minnesota, but it has been advancing." (Press photo by John Autey: Kayakers on June 9 move through the Upper St. Anthony Falls Lock and Dam in Minneapolis one last time before it was closed)

The move was "the first time a navigable waterway has been closed to stem the tide of an invasive species," William Lager reports for Minnesota Public Radio. "It's unclear still if the plan—unique, so far, in the fight against invasives—will work. But the future of the river itself hangs in the balance."

"St. Anthony Falls is the only waterfall on the Mississippi River's 2,300-plus miles from Lake Itasca to the Gulf of Mexico. Invasive carp have been creeping north up the river since the 1970s—and this unique natural barrier has the potential to finally stop its spread," Lager reports. "Closing the upper lock to navigation takes away the possibility of carp hitching a ride above the falls alongside river traffic in the lock. Scientists are most concerned about the bighead carp, one of three types of the invasive fish threatening U.S. water systems. Once they enter a water system, these carp endanger nearly every level of the food chain, displace native species and alter the balance of the waterway's ecosystem."

The Asian Carp Regional Coordinating Committee on Tuesday released a nearly $60 million plan to prevent invasive carp from reaching the Great Lakes, where they could threaten the region's $7 billion recreational fishing and $16 billion recreational boating industries. "Key initiatives in the 2015 Framework include advancing a U.S. Army Corps of Engineers study on new controls at Brandon Road Lock and Dam (Joliet, Ill.) refining detection and control technologies, and continuing efforts to suppress fish populations through netting," according to a release from ACRCC.
Written by Tim Mandell Posted at 7/02/2015 02:14:00 PM