South reluctantly falling in line with ruling on same-sex marriage; some county clerks hold out 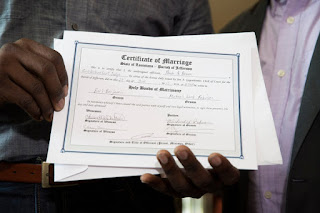 Louisiana Republican Gov. Bobby Jindal, who is running for president, said over the weekend that his state would comply when instructed to by a federal appellate court, Eckholm and Fernandez write. Louisiana is the only state not in compliance with the ruling.

Despite Jindal's defiance, many of the state's parishes began issuing marriage licenses on Monday to same-sex couples, "according to Forum for Equality, a marriage-rights group that had sent a letter to parish clerks on Sunday warning that they could be liable for violating couples’ civil rights if they refused to provide licenses," the Times reports.

"Marriages in Mississippi, which had been temporarily halted on Friday by an order from Attorney General Jim Hood, resumed in some cities on Monday after Hood clarified his statement and gave county clerks the right to make their own decisions," the reporters write. Hood said, “If a clerk has issued or decides to issue a marriage license to a same-sex couple, there will be no adverse action taken by the attorney general. Hood, who is seeking re-election this year for a fourth term, said “a clerk who refuses to issue a marriage license to a same-sex couple could be sued by the denied couple and may face liability.”

Campaign for Southern Equality, a gay-rights group, said that by late Monday afternoon, "at least 45 counties in Mississippi were providing marriage licenses to same sex-couples," the Times reports. "In Alabama, despite the clear hostility toward the Supreme Court ruling expressed by some top officials and previous rulings by the State Supreme Court, marriage licenses were being issued in most of the major population centers, although a few county probate judges stopped issuing any kind of marriage licenses, saying they did not want to violate their religious beliefs."

"The Association of County Commissions of Alabama, which advises the county governments, issued a statement on Monday in which it recommended that 'probate judges in Alabama follow the ruling of the U.S. Supreme Court beginning at 10 a.m. today,'" Eckholm and Fernandez report.

Some county clerks, mostly citing religious beliefs, have refused to issue same-sex marriage licenses. Seven counties in Tennessee have not yet begun issuing same-sex marriage licenses, Stacey Barchenger reports for The Tennessean. A few county clerks in Kentucky have said they won't issue licenses, John Cheves reports for the Lexington Herald-Leader. For a story on one, from Larry Rowell of the Casey County News, click here.