Ky. seismologists measuring ground movement in area that has drawn interest of oil and gas industry 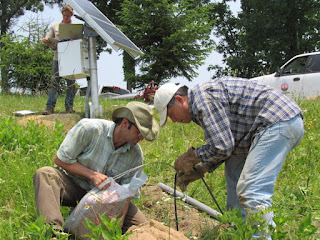 Seismologists with the Kentucky Geological Survey at the University of Kentucky are preparing for the possibility of hydraulic fracturing operations in the northeastern part of the state by "installing a network of highly sensitive seismic monitoring stations" to gauge the effect of fracking on earthquakes, Bill Estep reports for the Lexington Herald-Leader. A significant rise in earthquakes in Oklahoma has been linked to oil and drilling. Kentucky has not had any major earthquakes linked to oil and gas operations. (Herald-Leader photo: UK seismologists Seth Carpenter, left, and Zhenming Wang preparing a monitoring station)

Seismologists are installing "at least 15 stations in the region to measure ground movement," Estep writes. "The goal is to collect baseline data on earthquake activity in the region before any significant increase in oil production there. Then, if that development comes, researchers will have better information to measure its impact, if any, on the number and strength of earthquakes."

While the state currently has monitoring stations, the new ones are more sensitive, are being placed closer together and are able to detect smaller earthquakes, Estep writes. "The new stations also will help provide information to better assess the earthquake hazard in the area."

The area being considered for drilling—the Rogersville shale layer—lies 9,000 feet or more below the surface, Estep writes. Companies are believed to have drilled—or gotten permits to drill—at least half a dozen deep wells in the area since 2013 "to figure out whether there is sufficient oil in the Rogersville shale to justify commercial development, according to people familiar with the issue."

"Companies are allowed to keep much information about test wells secret, but it's clear there is a good deal of interest, said David C. Harris, who heads the Energy & Minerals Section of the Kentucky Geological Survey," Estep writes.
Written by Tim Mandell Posted at 6/30/2015 11:20:00 AM