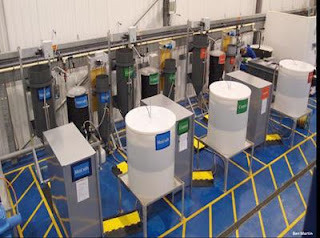 Nanomaterials, a common component in many industrial and consumer products, "may be more toxic to plants and microorganisms than other forms of metals," says a study by University of Kentucky scientists published in the academic journal Environmental Science and Technology, reports UK College of Agriculture News. (Cranfield University photo by Ben Martin: The pilot wastewater treatment plant that researchers constructed and used for this study)

Researchers studied biosolids—treated sewage sludge used on farms—"from a simulated wastewater treatment system containing the nanomaterials silver, titanium dioxide and zinc oxide and examined their effects on plants and microorganisms," UK Ag News reports. "Nanomaterials from common consumer products like sunscreens, cosmetics and textiles end up in wastewater treatment facilities where they are removed from drinking water and reside with sewage sludge. Further processing at the plant turns this sludge into biosolids. Until recently, these nanomaterials have not been present in biosolids.

Researchers "found that the biosolids with nanomaterials prevented the colonization of plants by nitrogen-fixing bacteria and changed the composition of microorganisms in the soil," reports UK Ag News. "As a result, the plants had stunted growth and took up far more zinc compared to biosolids containing typical forms of the meta." (Read more)
Written by Tim Mandell Posted at 7/01/2015 02:11:00 PM