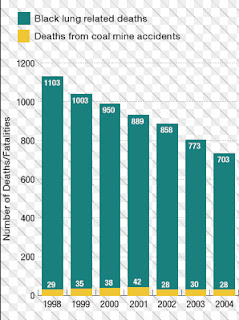 The coal industry is looking to halt standards scheduled to go into effect Feb. 1 that would reduce miners' exposure to breathable dust that can cause black lung disease, Bill Estep reports for the Lexington Herald-Leader. The National Mining Association, Murray Energy and other coal companies filed a motion this week seeking a stay of the rule, which would "require miners to wear continuous personal monitors to check their exposure to dust, and companies would have to do more frequent sampling to check for compliance with dust limits." Improved safety led to a record low of 28 mining deaths—11 in coal mines—in 2015, Estep writes in a separate story. But the number of mining deaths has long paled in comparison to deaths from black lung deaths. (NPR graphic)

"Industry groups argue that the requirement for personal dust monitors and more frequent sampling is at odds with a separate rule on the use of rock dust," Estep writes. "Coal operators are required to apply non-explosive dust, such as ground-up limestone, to surfaces in underground mines to keep coal dust from exploding. The new personal dust monitors pick up rock dust and coal dust," which could lead to "the potential for violations of dust limits under the new rule not because of miners’ exposure to the toxic substance the standard covers—coal dust—but because of exposure to rock dust, industry groups said in their motion." The industry motion stated: “Simply put, the two rules are in direct conflict with each other, meaning operators will be doomed to violate the one or the other.”

Critics say the Mine Safety and Health Administration "overstepped its authority in adopting the rule and relied on flawed data," Estep writes. They say "without the stay, coal companies face considerable expense to comply with standards they probably can’t meet and that could be struck down," Estep writes.

Luke Popovich, spokesman for the National Mining Association, said "a stay would give the industry, regulators and researchers time to come up with a sampling system 'that restores confidence and recognizes all the tools available to protect miners—tools that we advocated during the rulemaking but which MSHA rejected," Estep writes. Another phase that would lower the legal limit on miners’ exposure to dust is scheduled to go into effect Aug. 1.
Written by Tim Mandell Posted at 1/07/2016 12:47:00 PM