More rural Americans are finishing high school and graduating from college, according to the U.S. Department of Agriculture's 2015 Rural America at a Glance report. From 2000 to 2014, the number of rural adults with a four-year college degree increased by 4 percent, while the number of rural residents without a high school diploma or GED decreased by 9 percent, Jackie Mader reports for Education Week.

The report found that "educational attainment levels are lower for rural minorities, including black, Hispanic and Native American residents," Mader writes. "In 2014, only 13 percent of white rural residents had less than a high school diploma, compared to 40 percent of rural Hispanic residents and 25 percent of rural black residents. These attainment levels directly correspond to unemployment rates, according to the report. Rural residents with more education are more likely to be employed, due to a demand for more highly-skilled labor in rural areas."

Researchers also found that rural child poverty rates are higher in areas that have lower educational attainment rates, Mader writes. "Overall, rural child poverty rose during the recession and has increased in post-recession years. In 2014, 25.2 percent of rural children lived in poverty compared to about 22 percent in 2007." (USDA graphic) 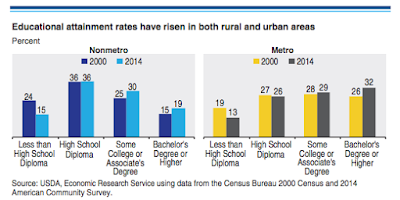