Puzzanghera writes, "The Postal Service's inspector general's office agrees. It estimates that expanding financial services beyond the current limited offerings, which include money orders and international funds transfers, could pump $8.9 billion a year into the financially struggling agency." The American Postal Workers Union is also on board, forming a coalition, the Campaign for Postal Banking, which garnered 150,000 signatures for a December petition urging USPS to expand its financial offerings. (Times graphic) 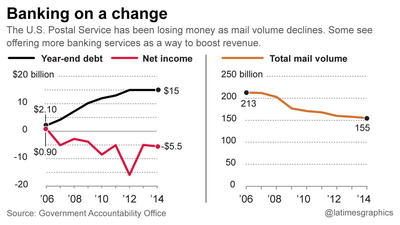 About 9.6 million U.S. households in 2013 did not have anyone with a bank account, according to a Federal Deposit Insurance Corp., Puzzanghera writes. "An additional 24.8 million households had accounts but also used alternative financial services, such as payday loans." USPS, which hasn't ruled out the idea of expanded banking services, said in a statement, "While we currently provide our customers with certain financial services, including money orders, electronic funds transfers and cashing of U.S. Treasury checks, our core function is not banking."